Rhino.Inside.Revit allows Rhino shapes and forms to be encoded into, and categorized as Revit elements. It is important to note that the easiest and quickest way of moving geometry into Revit may not be the best method. Determining which the final goal of the forms in Revit can improve the quality of the final Revit data structure and increase project efficiency.

Revit data model is based on a categorization system. Determining the best categories and subcategories to use will allow the elements to be drawn and scheduled properly. The challenge is that not every Revit category is available for each method discussed here.

There are 3 main ways to classify and move Rhino geometry to Revit. Each successive strategy increases the integration within a BIM model, but each strategy also takes a bit more planning. The 3 ways are:

When determining which method and category to use, reference this list of Revit Categories and the type of Families they can accept from Rhino.Inside.Revit.

Here is a Rhino model and quick Revit drawings for a competition model using DirectShapes: 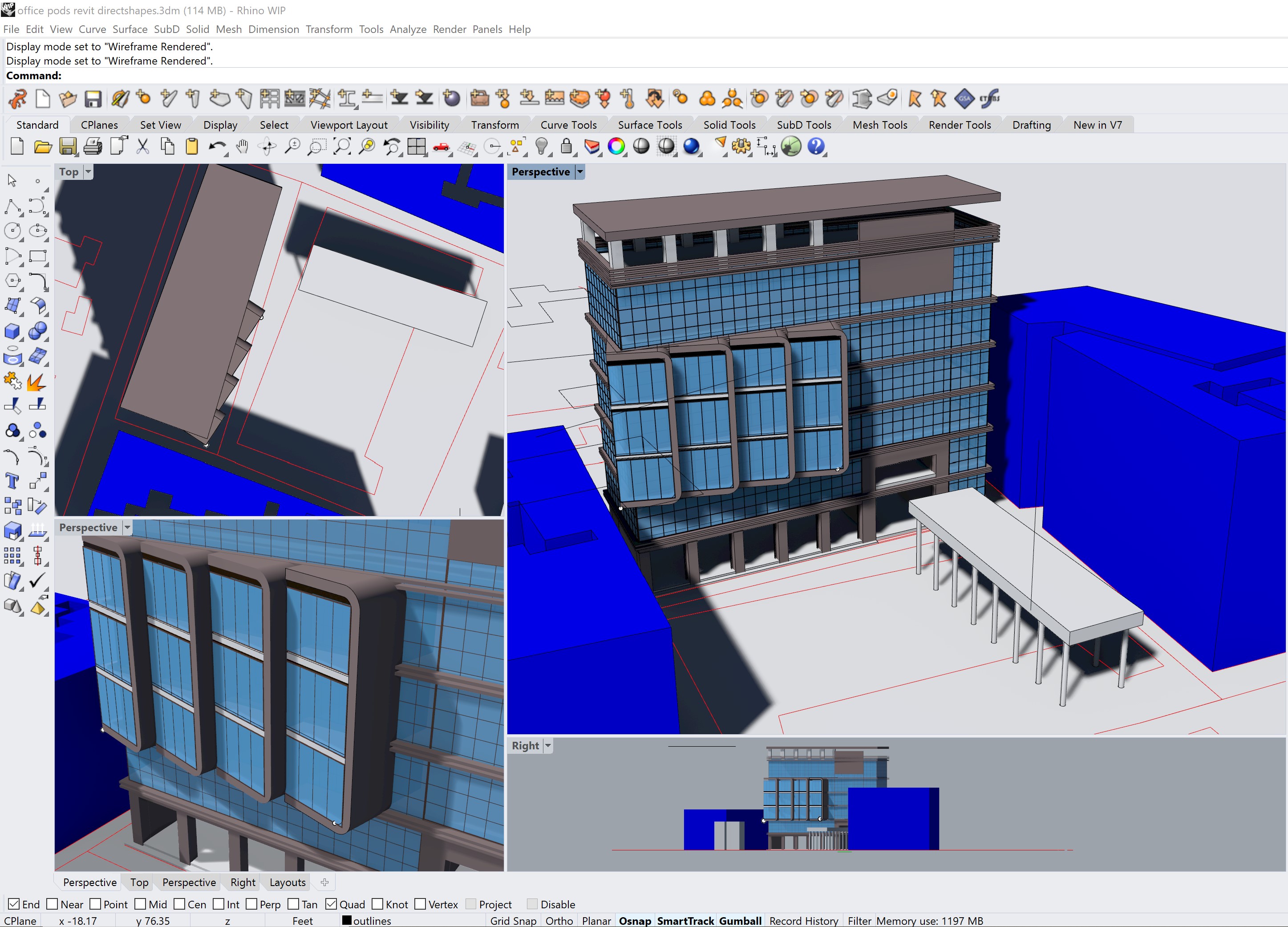 Through a simple Grasshopper script, objects can be categorized for elevations: 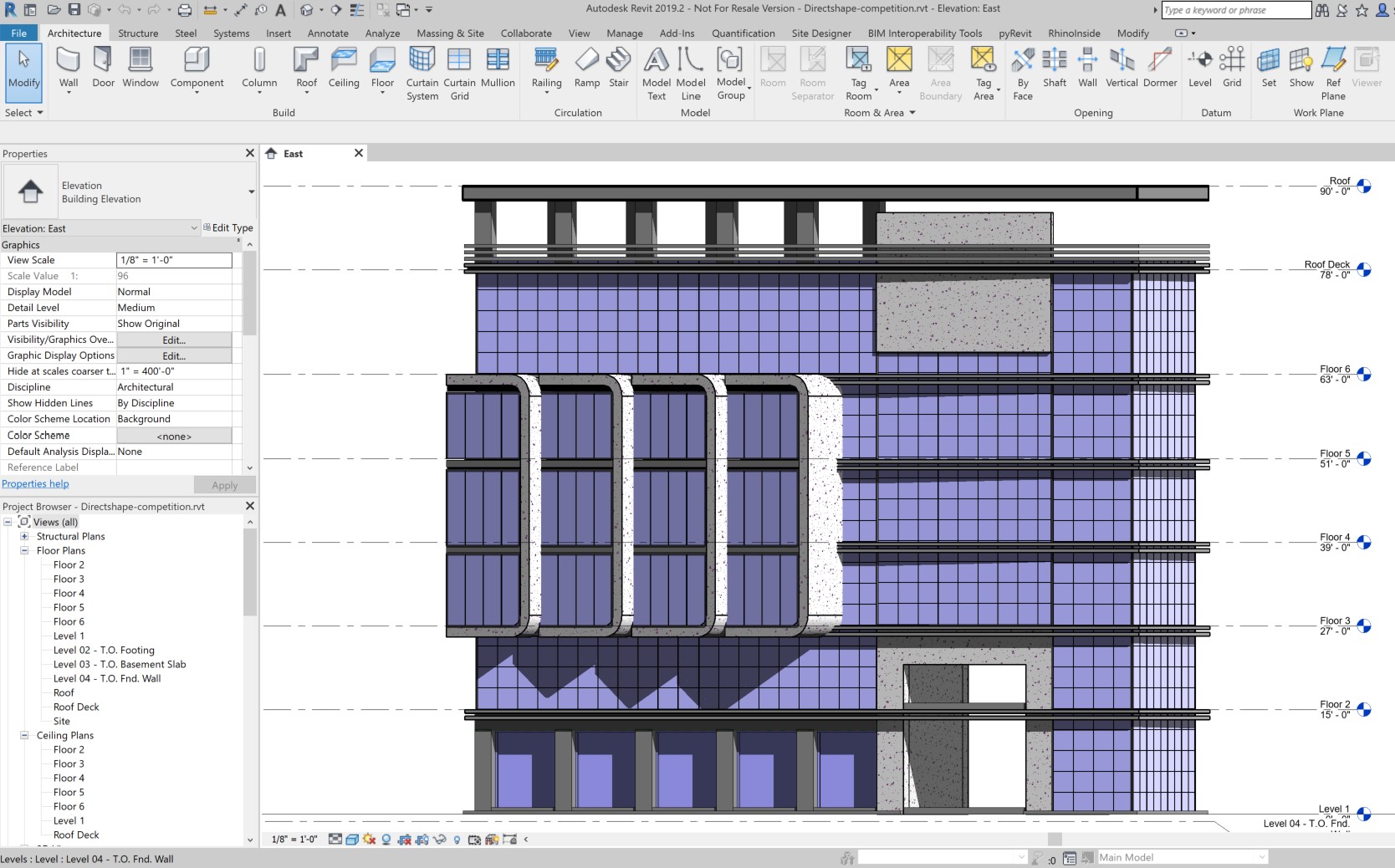 And plan views using the categories to control graphics: 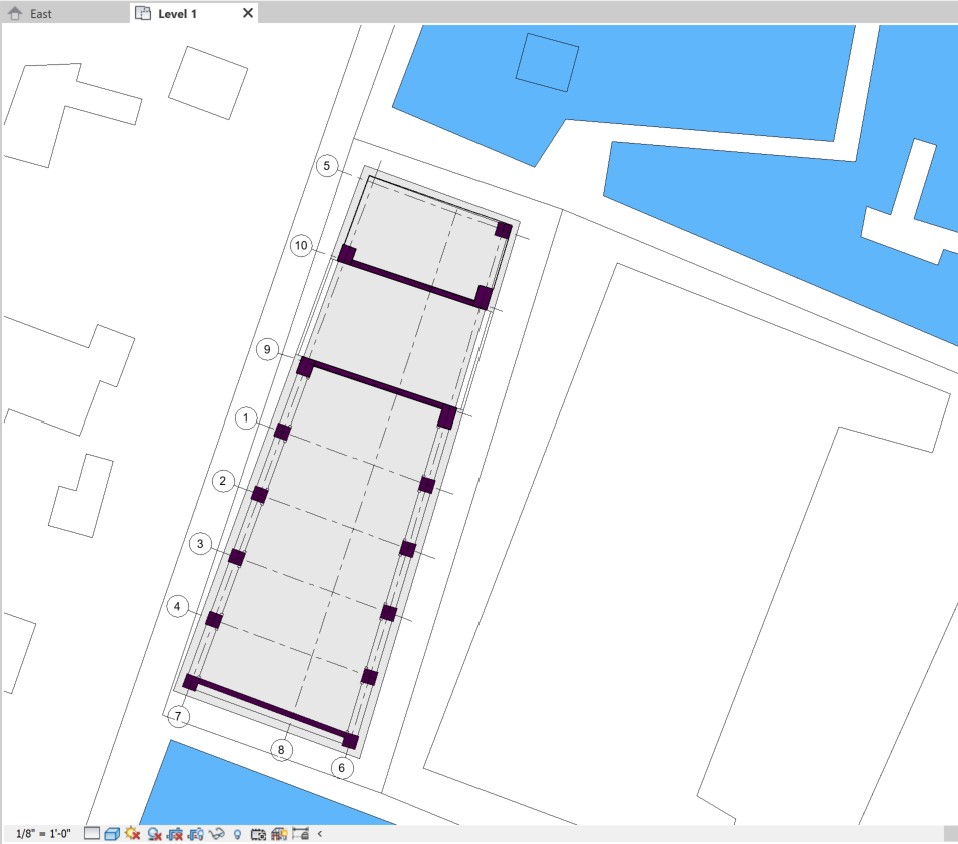 DirectShapes are the most obvious and many times the easiest way to get Geometry from Rhino into Revit. DirectShapes are generic Revit elements that can contain and categorize arbitrary non-parametric geometry inside the Revit model. However, since the geometry is not parametric, Revit does not know how they are created and can not resolve interactions between DirectShapes and other native elements. An example is that native Revit walls can not be extended to reach a DirectShape roof geometry.

Good reasons for using DirectShapes include:

DirectShapes can be placed in any top level Category enabling graphic and material control thru Object Styles:

For additional graphic controls between elements within a category, Rule-based View Filters can be applied with custom parameter values. DirectShapes cannot be placed in subcategories but the source geometry can be imported into Loadable Families and be assigned a cubcategory (discussed later in this guide):

In addition to pushing Rhino geometry into Revit as DirectShapes, it is also possible to create DirectShape types that can be inserted multiple times for repetitive elements:

Rhino objects imported as forms inside a Revit family allow for inserting multiple instances of an object and also assigning subcategories. You can use subcategories to control the visibility and graphics of portions of a family within a top level category.

Wrapping Rhino geometry inside Loadable Families have many advantages: 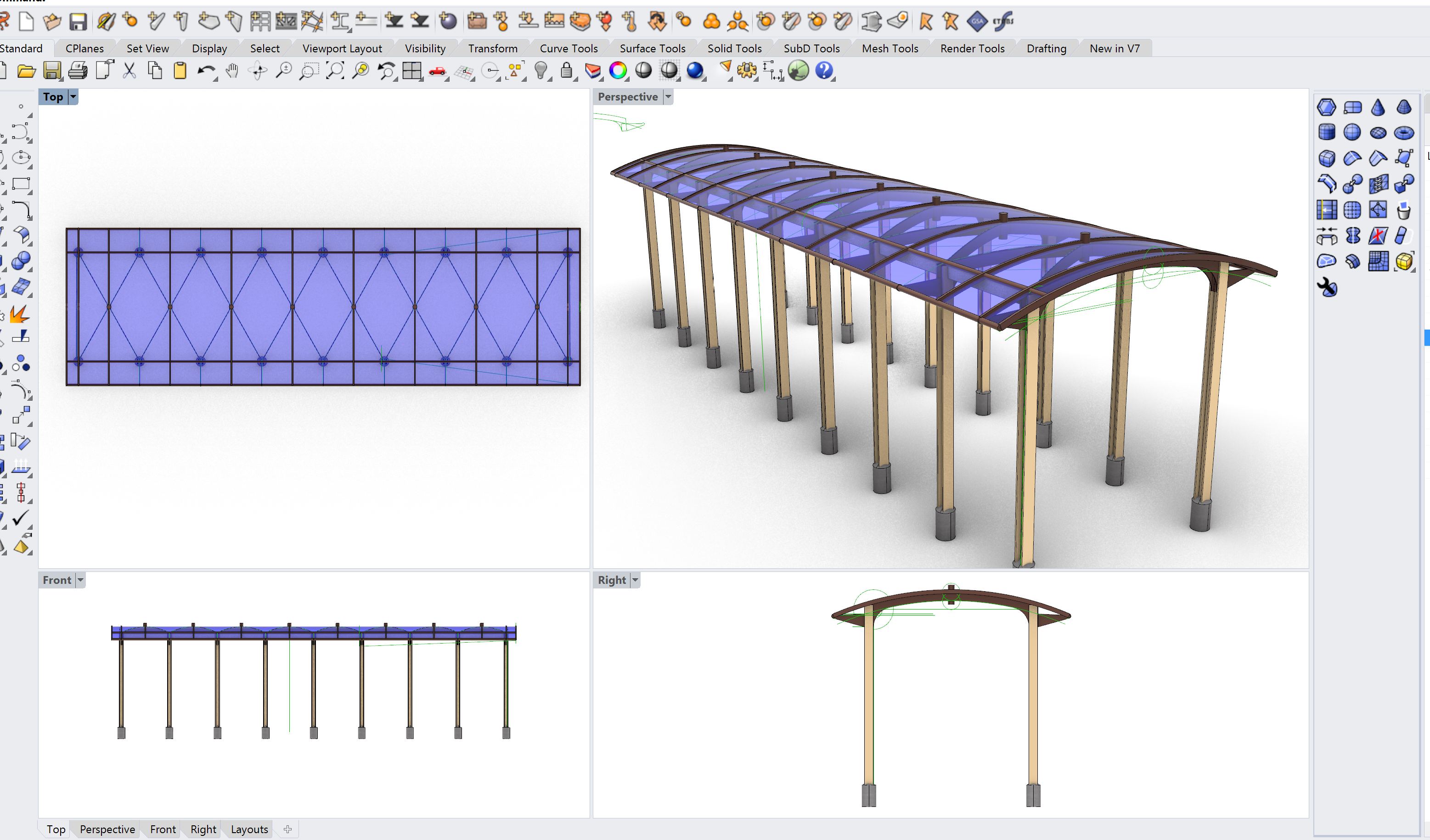 By mapping Rhino layers to subcategories in Revit an automated translation can be used. Graphics and materials can be controlled in Revit per subcategory and view:

The process of creating subcategories is covered in this video:

Below is the key part of the definition to create a new Loadable Family in Revit. The Family is created at the black

New Component Family component. Inputs include the a family template, the name of the new family and the category the family will belong to. In addition the

Component Family Opening component is used to create Forms that will be placed within the Family. The Form component will accept the BREP geometry, Visibility, Subcategory and material for each form. If the sub-category does not already exist, the

Add SubCategory component can be used to create of assign a subcategory before sending them to the family creator component:

Subcategory properties can be edited in the Object Styles dialog: 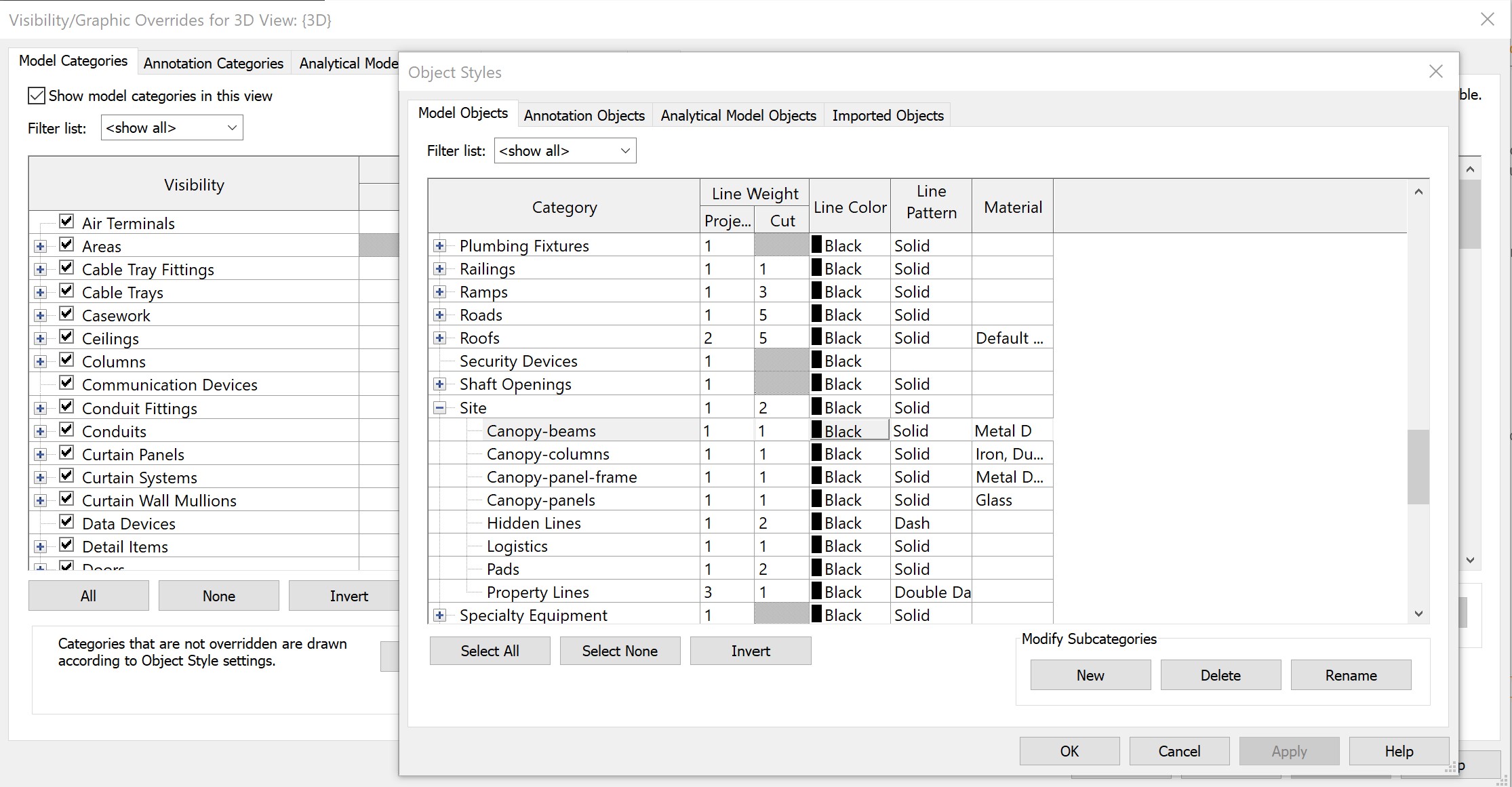 Subcategories can also be used with Rule-based View Filters for additional graphic control.

Using built-in Revit System Families such as Walls, Floors, Ceilings, and Roofs can take the most amount of thought, however, the extra effort can be worth it. Advantages of native elements include:

For more information on working with each category of Revit elements, see the Modeling section in Guides