One Revit is loaded, click on the Start button under Revit > Rhino.Inside tab to load the Rhino.Inside.Revit

There is a slideout under the Start button that contains informational tools and the Rhino.Inside.Revit Settings 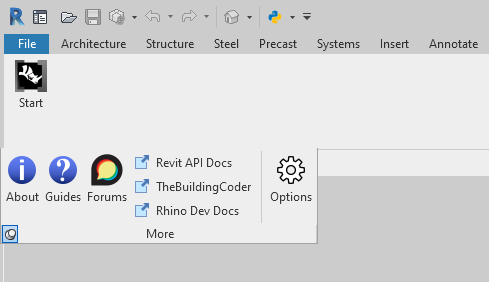 Here is a description of the buttons and functionality available on this ribbon.

You can choose to Start Rhino automatically, and adjust other general settings from here:

Update channels can be set here. You can subscribe to Stable Public updates or Daily (Work in Progress)

If there are any updates available, both the Start and Options buttons will show a notification dot and the new update release info on the tooltip:

You can get the information and download the installer from Options / Updates. Please make sure to close Revit before installing the new version. 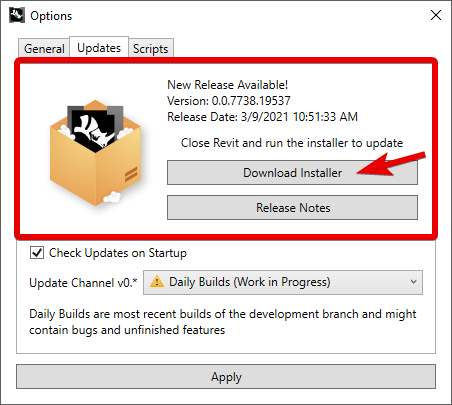 Grasshopper scripts can be loaded into the Revit UI. Create a directory on your machine that contains Grasshopper (*.gh or *.ghx) scripts. All the scripts at the root of this directory will be added as button to a new panel with the name of this directory. All other sub-directories will be converted into pull-down buttons on the ribbon.

The My RIR Tools panel shown in the image below is created from a directory of Grasshopper scripts:

Now add the path to this directory inside the Rhino.Inside.Revit Options / Scripts: 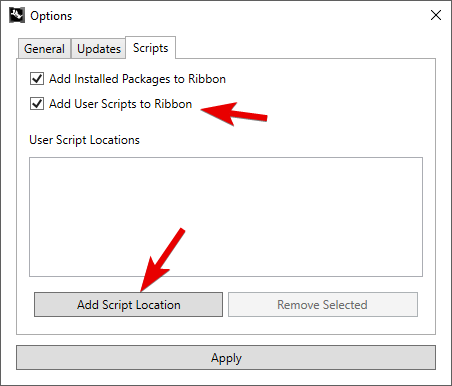 The “Use Script Locations” list will show all the directories that will be loaded into the UI:

Once settings are applied, the scripts will be loaded into the UI and are easily accessible:

Rhino package manager can be used to install Rhino and Grasshopper packages, and Rhino.Inside.Revit scripts.