Getting Started with Rhino.Inside.Revit

Rhino.Inside.Revit is one of the Rhino.Inside’s most exciting projects. It is an addon for Autodesk Revit® that allows Rhino 7 to be loaded into the memory of Revit just like other Revit add-ons.

Rhino.Inside.Revit brings the power of Rhino 7 and Grasshopper to the Autodesk Revit® environment

The Rhino.Inside.Revit installer is also available on Food4Rhino Website

Now that we have installed both dependencies, we can proceed to loading Rhino.Inside.Revit

Launch Autodesk Revit®. You will be prompted to confirm loading Rhino.Inside.Revit. Make sure to press Always Load to skip this dialog in the future.

After load is complete, note the new Rhino.Inside tab in the Revit UI

Click on the Start button to start loading Rhino.Inside.Revit. The addon, attempts to load Rhino 7 inside Revit’s memory and make sure it is licensed. Once the load process is completed, new Rhinoceros and Grasshopper panels will be added to the toolbar.

See Rhino.Inside.Revit Interface for a complete list of buttons in the Rhinoceros tab

If you encountered any errors, please consult the Known Issues page for a list of already known issues and their temporary workarounds.

Arguably one of the most important features of Rhino.Inside.Revit is Grasshopper. Open it by clicking on the Grasshopper button in the new Rhinoceros tab. Note the extra Revit tab in Grasshopper window, with many Revit-aware components:

There is also a Revit Primitives panel on the default Params tab:

The Revit-aware component icons help identifying the action that the component performs. As shown below, the base color shows the type of action (Query, Analyze, Modify, Create). There are a series of badges applied to icons as well, that show Type, Identity, or other aspects of the data that the component is designed to work with:

To get started, let’s create a simple definition in Grasshopper to extract geometry of a Revit element. Grasshopper is by far one of the most exciting add-ons for Rhino and as part of the Rhino.Inside.Revit project has the potential to improve the design and documentation in Autodesk Revit® dramatically.

Open a simple Revit model and draw a single wall 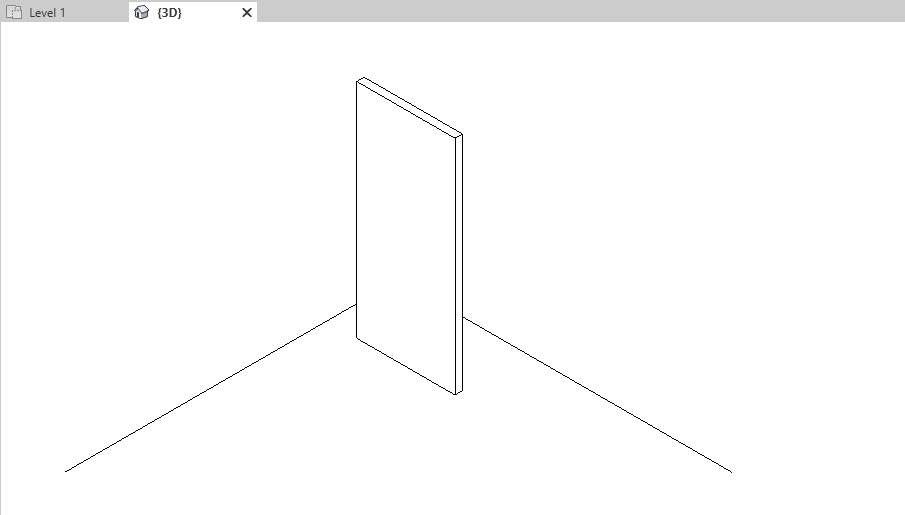 From the Params > Revit panel, add a

Now Right-Click on the component and click on Select One Revit Graphical Element. Grasshopper switches to Revit window and asks you to select a Revit element. Select the single Wall element we created earlier. 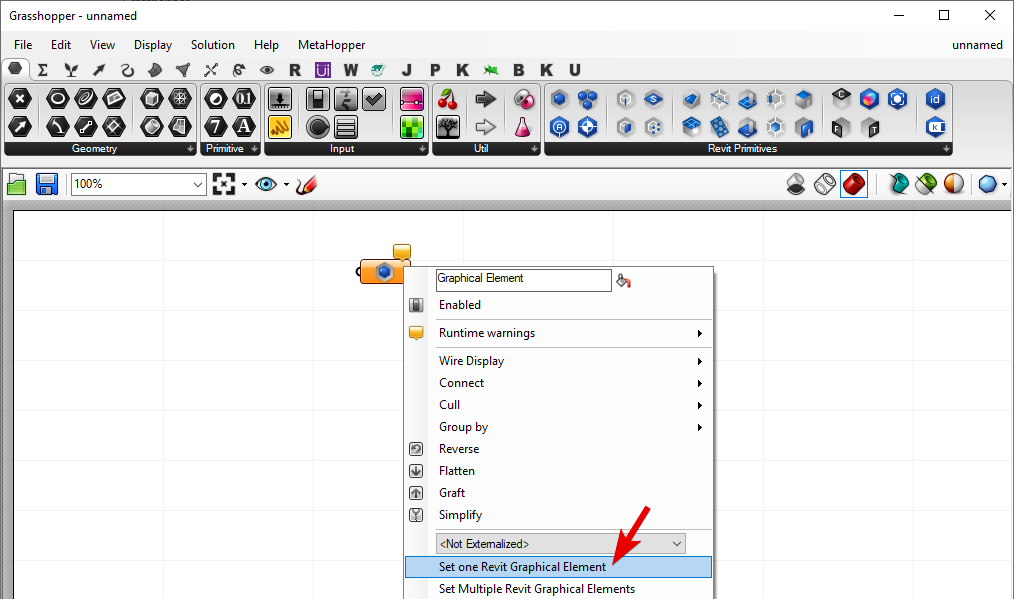 Now drop a Panel component into the definition and connect the

Graphical Element output to its input. You can see that this parameter now contains the selected wall element:

Let’s grab the Wall geometry by using a Revit-specific component. From Revit > Elements add an 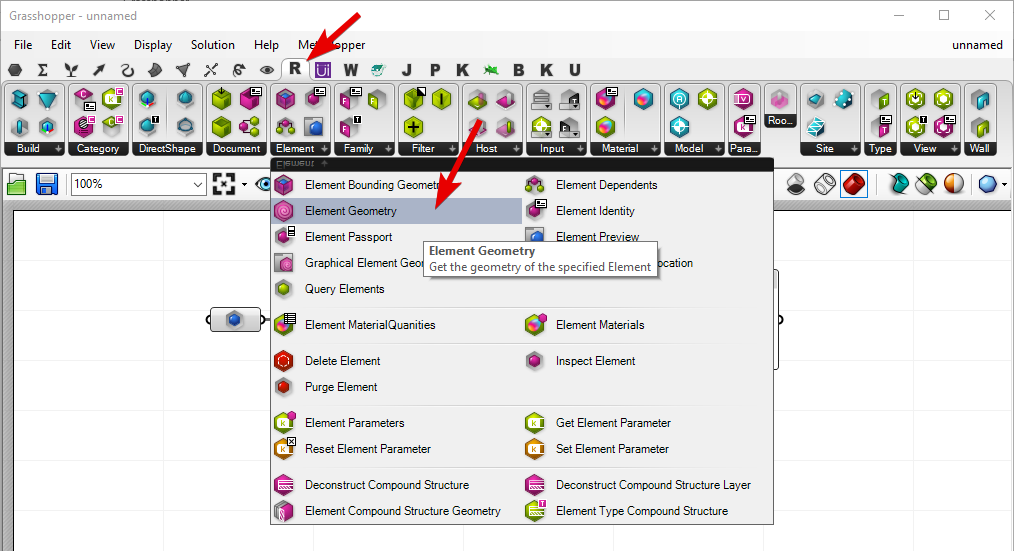 Graphical Element output to the input of the 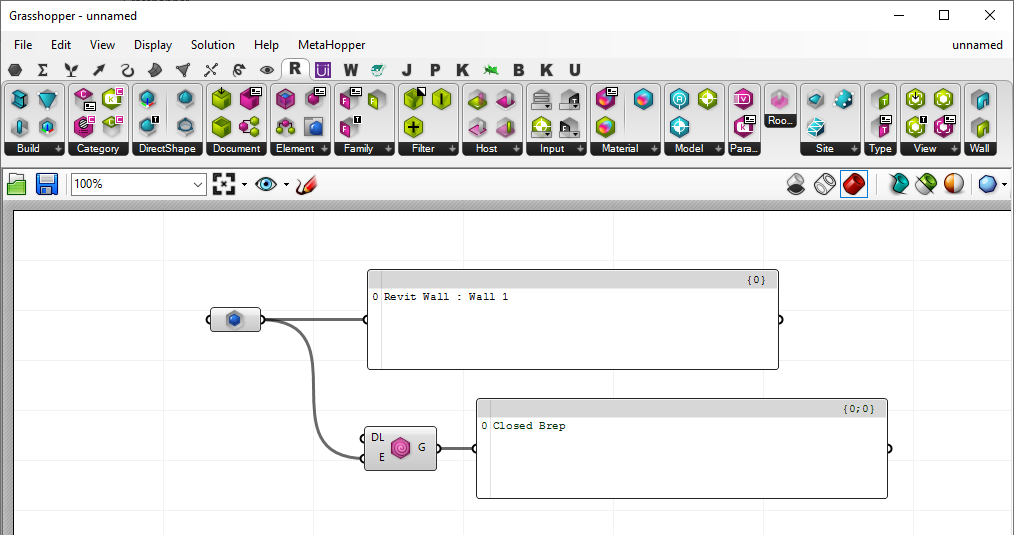 Similar to other Grasshopper geometric components, the output geometry is shows as preview in both Revit and Rhino viewports

In the section above, we saw an example of converting Revit geometry into Rhino using custom Revit components in Grasshopper. Grasshopper has many other Revit-specific components. A subset of these components allow the user to create new content inside the Revit document.

Open Rhino (inside Revit) and create a simple line 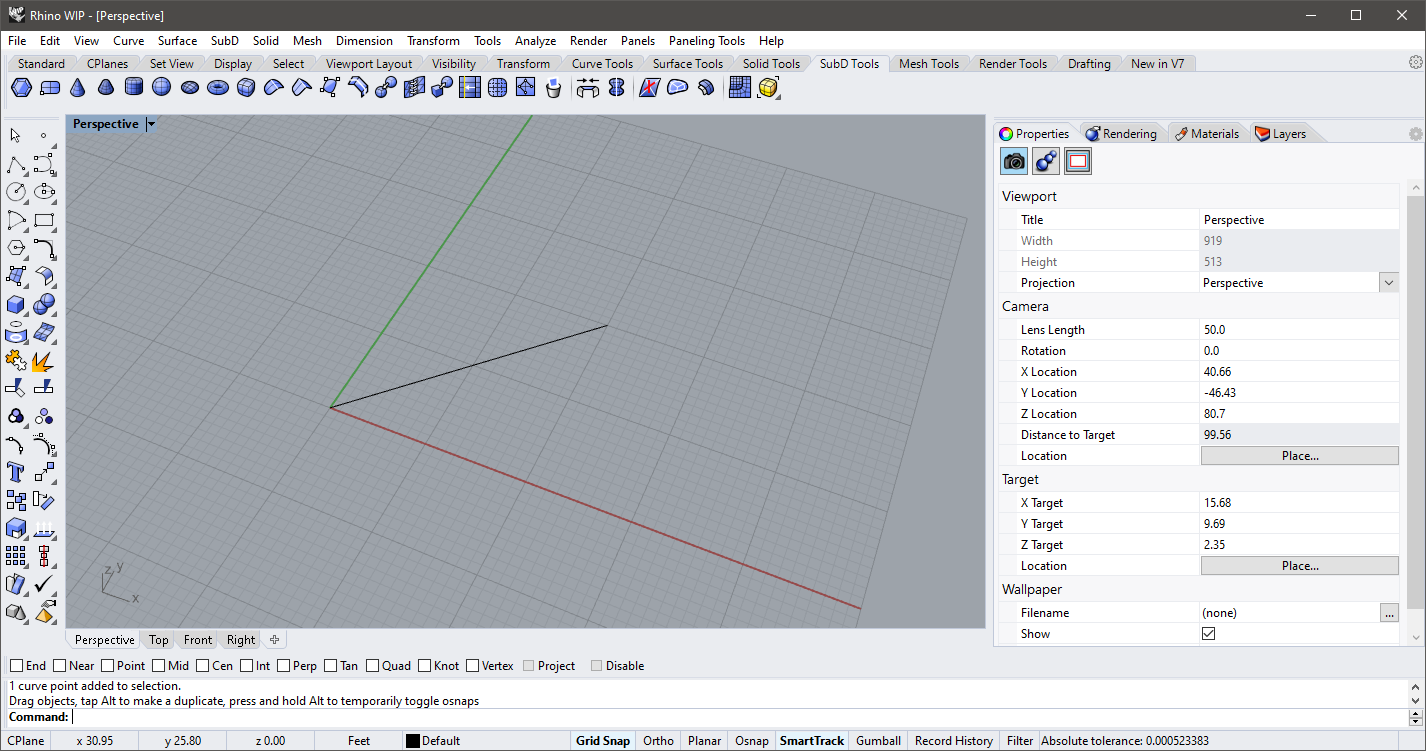 Now open Grasshopper and add a curve component. Right-Click the component and select the newly created line in Rhino.

Now from the Revit > Input panel and

To create a wall, we are going to use a custom Grasshopper node that can create a Revit wall by curve. From Revit > Build panel add a

Now that we have all these components inside the Grasshopper definition, let’s organize them before connecting the parameters

Now connect the output of the

Built-In Categories to the input of

Element Type Picker now shows a list of wall types collected from the model. Select a basic wall type. This wall type is going to be used to create the new wall.

Now connect the rest of the components as shown below

Add Wall (Curve) component now has all the information to create a new wall in Revit. 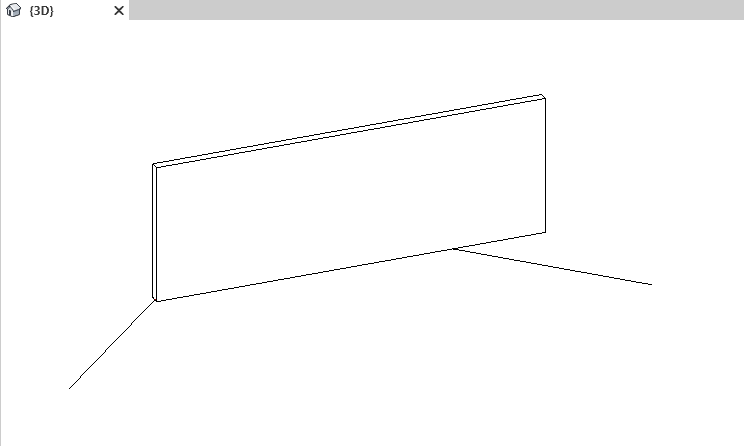 The same wall geometry is also visible in Rhino

Arguably the most important feature of a visual programming environment like Grasshopper is the interactivity of its components. Rhino.Inside.Revit project brings this interactivity to the Revit environment and allows the designer to explore the design space a lot more efficiently and create novel solutions.

Let’s grab the height slider from the example above, and move it back and forth a bit.

Since Rhino is running inside the memory of Revit, potentially all the Rhino and Grasshopper add-ons can also have access to the Revit API. This feature makes the Python scripting in Rhino and Grasshopper exponentially more powerful since the python scripts can use Rhino API, Grasshopper API, and Revit API at the same time. Alongside these APIs, the Rhino.Inside.Revit addon also provides extra functionality that is mostly focused translating Rhino/Grasshopper data types to Revit and vice versa.

Take a look at this example python script. It imports symbols from all the mentioned APIs into the script.

So to use the example above, we can add the lines below to our script to read the geometry of input Revit element (E) using Revit API (.Geometry[DB.Options()]) and the pass that to the utility method provided by Rhino.Inside.Revit API to convert the Revit geometry into Rhino (Convert.ToRhino()) and finally pass the Rhino geometry to Grasshopper output. 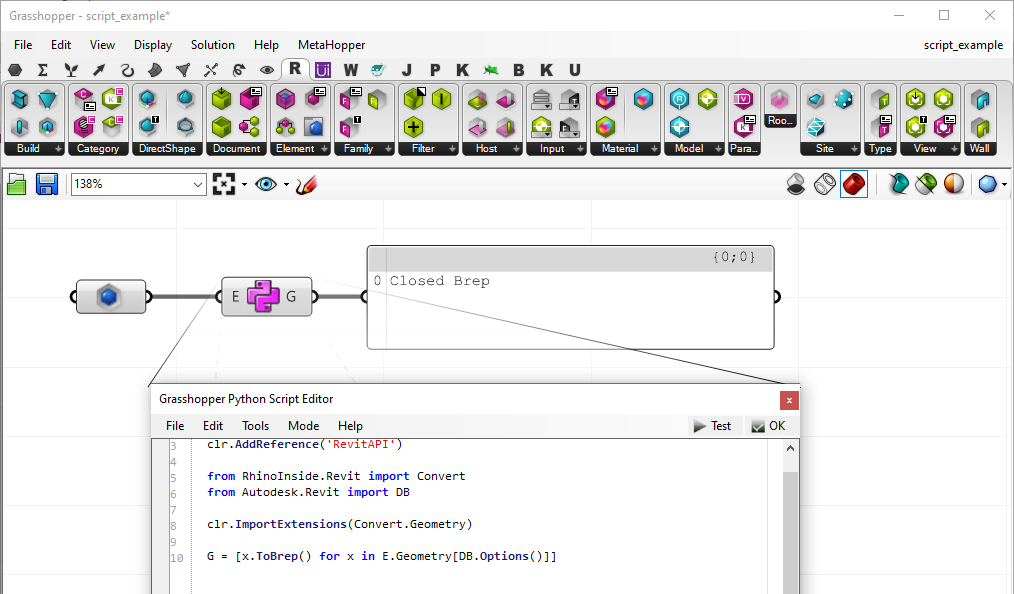 Rhino.Inside.Revit is already a very powerful tool but with Python and C# components, the possibilities are endless.

The Guides section listed on the navigation bar, is a great next point to see how Rhino.Inside.Revit can be used in tackling many design and documentation challenges in Autodesk Revit®. The articles under this page provide many examples on creating Grasshopper definitions and writing your own custom scripts.

Take a look at the Discover page to find out how Grasshopper and Rhino can be used in Revit workflows.

Reach out to Rhino.Inside.Revit developers and the users community on the forum if you came across a special condition that might need a new component or a more detailed explanation.